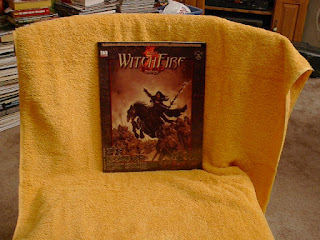 Hell has come to the City of Ghosts.

As Raelthorne chokes the life from Corvis with his army of the strange and foreign Skorne, our heroes become the last chance to stop the Exile's dark plan. Hope lies in a wicked blade, an ancient legend, and a psychotic adolescent girl who doesn't know when to quit.

Return to the Iron Kingdoms in the third book of this award winning D20 adventure series. Experience a world of full metal fantasy, where the embers of ancient conflict fuel the fire in which heroes are forged.

Haven't played through Book 1 or 2 of the Trilogy? No problem. This adventure can be dropped into any fantasy D20 campaign.

Requires the use of the Dungeons & Dragons Player's Handbook, Third Edition, published by Wizards of the Coast.

An adventure for characters of 5th - 7th level.