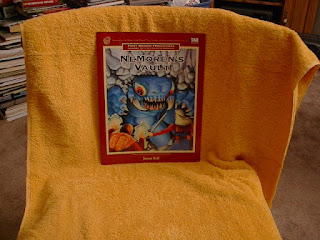 The last of his line, Baron Paytro NeMoren has left his dark past sealed for decades in the family's underground vault. Now, three years after his death, a group of stalwart adventurers has gathered according to the baron's final wishes. At long last, the seal will be broken and the secrets of the vault will be revealed. Can some sins be forgiven? Can death stop the thirst for revenge? Find out when you enter NeMoren's Vault.

NeMoren's Vault is an introductory fantasy roleplaying adventure for use with the D20 system. For 1st-3rd level characters.

Notes on This Edition
32 pages. Included with this adventure are full color character and monster counters, full color visual aids and handouts, a battle grid, and pre-generated characters for "out-of-the-box" action!