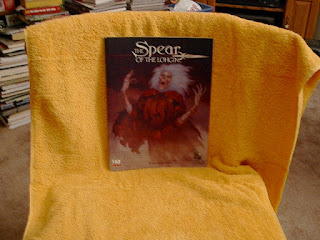 Everything dies, but not even death is eternal. The players are enlisted to investigate a strange plague that recently decimated the peaceful hamlet of Ashvan. What they find is a strange conspiracy revolving around the theft of a divine relic entrusted to a fallen order of knights. Now, the only thing that stands between the lands of the living and the lands of the dead is you...The Spear of the Lohgin is the first part of the Canceri Chronicles, a series of adventures that focus on the wicked nation of Canceri, a place of macabre horror and deadly intrigue. The first installment in the trilogy relates the tale of an ancient tragedy that returns to haunt the noble country of Milandir and reveals the initial threads of a plot to plunge the civilized nations of the world into an eternity of darkness.

An Adventure for Four to Six Players, Levels 4-6