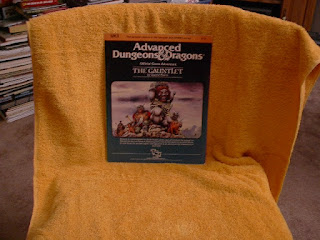 "Indomitable it stood for centuries, a symbol of order in a world of chaos. Bastion of the pass through the Kamph Mountains, the very stones of the Keep of Adlerweg were the stuff of legends. What evil power had strength enough to take it? How were its defenses swept aside?

Fell creatures now attend the battlements that overlook the only pass between Berghof and the sea.

This is not a petty problem to be solved by the militia of the local villages. These and more may be needed to withstand the mayhem stirred up by the fall of the Keep. Indeed, if the Keep is not retaken, and retaken soon, the Hold of the Sea Princess itself may not be secure.

Now is the time for heroic action. Aided by te Sentinel, former protector of the legendary Guardians of Adlerweg, have you the courage and determination to rid the Keep of its sinister occupants?

This module can be played alone or as the second adventure in the two-part ALDERWEG series."