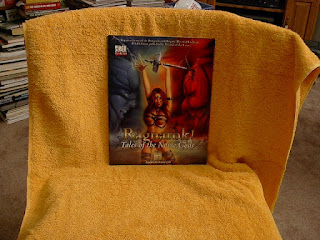 "A d20 System sourcebook from a noted authority on the Viking sagas and religion, using original sources. Players take the roles of lesser gods and goddesses from the Norse pantheon, questing and performing heroic deeds worthy of a saga, in order to forestall the 'Doom of the Gods,' called the RAGNAROK. Contains a complete system for using Norse Runic Magic, easily transferred to your own campaign!"