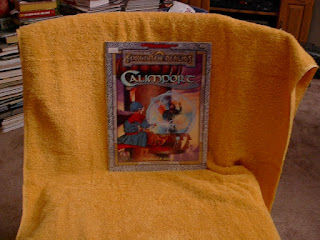 The City of Glory Revealed at Last!

"Calimport? I'd sooner dive into Undermountain than risk my ship going to that gods-forsaken city!"

"Ah—the fabled City of Glory. Its wonders remain unmatched by any other city across Faerûn, e'en Waterdeep, for Calimport does not impede anyone's business due to some overbearing morality."

"Walking through Calimport, either among the alleys or atop the sabban walls with the nobility, immerses you in danger and corruption, as if you swarm through eels and asps rather than walked its dusty, ill-kept roads."

What can one truly know about a place until he or she has experienced it firsthand? Calimport is a place of many truths, each more disturbing than the last. It is also the most influential trade city in southern Faerûn, whether its detractors admit it or not. Building on materials from Empires of the Shining Sea, this supplement expands tremendously on what we know about the city that has been the seat of Calishite power since the arrival of the Djinni lord Calim eight millennia ago. What can be found inside?


Everything you need to know about the peril-riddled alleys, palaces, and underworld of the most dangerous city on Faerûn is contained within this 96-page book. Walk the dark paths among the sabbans or fly among the gilded minarets, but know that a thousand eyes and a thousand intrigues swirl about you at any moment! Come explore one of the oldest cities of Faerûn. The trip may change your life....