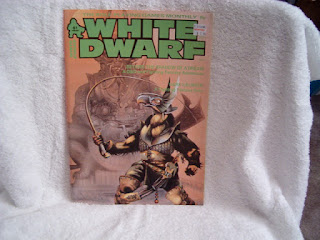 FEATURES:
'The Spice of Life by Oliver MacDonald
Alchemical goings-on in RuneQuest

Eye of Newt and Wing of Bat by Graeme Davis
Tempering with magic rings, armour and shields

Beyond the Shadow of a Dream by Ian Marsh
Is all what it seems in this D&D/Fighting Fantasy scenario?

The Travellers by Mark Harrison
Dressed to kill...

Treasure Chest
Show your talents with our special scenario competition