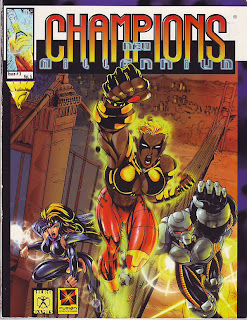 Champions is a game you play because of the system and not the content that has come out of the modules and rules over the years. New Millennium is not part of the Hero system but it is instead a recreation under the Fuzion system. This was released in 1997 and I have never had a chance to use it. I have heard mixed reviews of the system in general of of this book specifically. I am fairly certain I will never play it. Champions has always been my favorite superhero game of choice (sorry V&V) and I get the feeling this would be going out with someone who is very close in appearance to an old girlfriend. Initially exciting but in the end something that mars memories.

A conversion of the popular Champions superhero RPG to the new Fuzion game (with Plug-Ins, Switches and Dials to let players tweak the setting). This 200pg softback book gives you all you need to start and run a superhero RPG. The game includes the Champions character creation system of buying characteristics, talents, skills and your superpowers. There's some introduction content to guide the DM on how to run the game and campaign, and a lot of campaign material and pre-made characters to get you started.

The book is lavishly illustrated and has 16 full colour pages of a comic book, in case you've never read one.
Posted by Wymarc at 6:43 AM