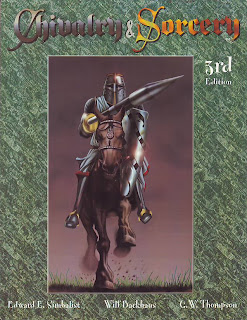 I presented the Creatures Bestiary yesterday so in the long tradition of putting the horse before the cart I now offer the core rulebook for the third edition.I bought this version of the game thinking I would run it at some point because as I said yesterday I had fond memories of the older incarnation of the game.

The game was released in 1996 and the book comes in at 202 pages in length. There were some new twists that were added in the third edition. It is also like the other versions a very complex game that is not for the light of heart. The level of complexity is amplified if you wish to play a mage in the game. Ars Magica might have a better/ more complex magic system but the one in C&S is not to be taken lightly.

A character creation system for both point based and randomly generated characters, or a mixture of the two, in about half-an-hour. Optional rules allow for special abilities, flaws, determining your character's Astrological sign and much more.
16 Character Vocations.
Our new Skillscape(TM) system, which allows any character to develop just about any skill.
250+ Skills.
Our new Crit Die(TM) system, which allows for quick and realistic results. All that's needed are three 10-sided dice!
Seven Mage vocations, a ton of spells, rules for creating magical devices, over 175 magical materials, and rules governing the creation of a Mage's focus.

Again these are just a few samples of what Chivalry & Sorcery 3rd Edition has to offer. The rules are simple to use, yet realistic, and can be learned in about an hour.
Posted by Wymarc at 6:51 AM