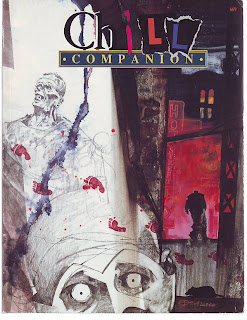 I have written about Chill in the past. This was the fallback horror game for the group that I gamed with the longest. Call of Cthulhu was the primary but there was a die hard Chill supporter in the group and when it was run I actually got to play for a change. Chill in the long run is most likely better for long term horror campaigns but CoC is hard to not default to.

The Chill Companion was released by Mayfair for their version of the game. I actually prefer the Mayfair edition for the rules. The Companion adds quite a bit to the game in new rules as well as game information and resources. This is borderline essential in my opinion if you are going to play Chill for any period of time. In addition to adding to an already well done core game it serves as a good resource if you want to play another horror based game.

"This 160-page  reference work is a must for every fan of horror role-playing. The Chill Companion traces horror as a genre through fiction and film, covering everything from the Gothic novel to slasher and modern psychological horror films. Each medium is described in full, enabling game masters to design scenarios and campaigns based on each type.