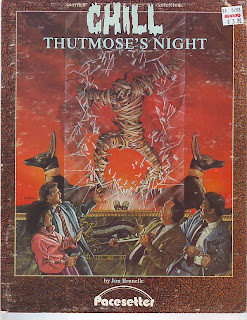 I am still going to go on the record as saying that CoC is my favorite horror game but the more I revisit these old Chill items I wonder if given equal play time if Chill might not have won the day. This is very much a Universal Horror type of adventure. Classic horror monsters are something that everyone can relate to as they are part of our shared psyche as it were. I won't begin to understand why these types of creatures are something we all understand and it is probably better I don't. In the end the adventure is one that might be too close to old movie plot lines but in the end that is what made the movies scary and I think it holds true for the adventure.

"It is the hour before dawn, the darkest hour, the hour when the dying most often slip away into that final flight from which there is, for most, no awakening, A soft breeze from the Nile River stirs the curtains, and Thutmose, Pharaoh of all Egypt, restless with pain, tosses fitfully on his bed.

"Merritet," he calls weakly, and at once the man, who has been standing all through this long night at his king's bedside, leans close so as not to miss a word, "You called, my lord? I am here as always."

Pharaoh's eyes seem distracted now, as though some part of him were watching for something only those close to that other world can see. The jackals of death, perhaps. And how many of the people burdened by this cruelest of Pharaohs might wish those jackals quickly fed?

"Merritet? You will not leave me?" the dying man whispers, plucking fretfully at his servant's arm. "You know I will not, my lord," Merritet replies as he secretly touches the vial of poison hidden in his cloak, the vial that will allow him to accompany his king on the journey to the Underworld and one day, perhaps, help him walk again in the land of the living…"
Posted by Wymarc at 8:53 AM