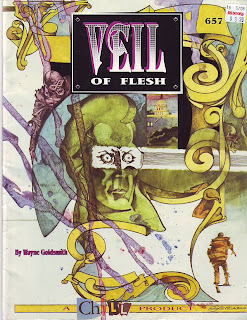 Veil of Flesh is a scenario pack released for the Mayfair version of Chill in 1992 and it comes in at 64 pages. The adventure is based in Washington DC and deals with desiccated bodies. The adventure is more than what the players might initially think and should keep them entertained.

From the back of this 64-page adventure:

"Strange goings-on are typical in Washington, D.C., but when dehydrated, ancient-looking corpses are found in an alley near Capitol Hill, not even the F.B.I. is willing to get involved. Enter your characters. Four to six of you must investigate these "murders" and venture from the Library of Congress through Washington Park, all the the way to The White House. This horrifying scenario features a new Creature of the Unknown, based on actual creatures of legend. Six pregenerated characters and maps of the D.C. area and of the White House are included."