Children of the Night - The Created 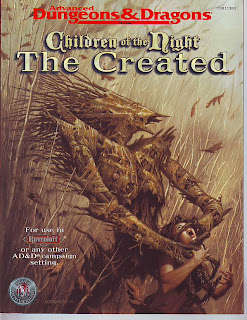 Ravenloft is an example of how a single idea can be expanded out into a product line. I recall the first foray into Ravenloft all too well. I was not surprised when it eventually became a setting.

I have found most of the Ravenloft products to be well done. I am a horror fan though so I love any lit morsel of a plot device or twisted ploy that could be used in the intended product or taken out into another. This is the fourth and final offering in the Children of the Night series. It features thirteen adventures each featuring its own unique creature offering as well as it's own author. Golems are not my favorite creatures and I think they have limited replay value but in a long running campaign this should be more than enough to last you.

The Whole Is Greater Than the Sum of the Parts

Within these pages lie the stories of 13 madmen and their singular creations. Some are flesh and blood, others glass or wax, even metal or mist. Whatever their makeup, each has the will to live - and sometimes that means needing to kill. They are more than just golems. They are the Created. And they are ready to make your acquaintance.

Among those lurking inside:

The Chaperone, a bestial companion with grave defects.
Automatic Man, a corroded "butler" entombed in rubble, eager to serve up terror anew.
Angelique, a perfect beauty with an imperfect past, terrified by the "killer within."
Dr. Bollenbach, a surgeon who know the many faces of death - and who would like you to meet them.

Children of the Night: The Created is the fourth volume in a series that celebrates the horrors detailed in the best-selling Van Richten's Monster Hunter's Compendiums. Each of the creatures in this book is introduced through a complete story describing its origin, powers, and personality, as well as a short adventure.

While these monsters are designed for the RAVENLOFT campaign setting, they can be unleashed in any AD&D game world. Each mini-adventure can serve as a diversion from regular play, a special "evening of terror," or become part of your ongoing horror campaign.

For all character levels.
Posted by Wymarc at 6:30 AM