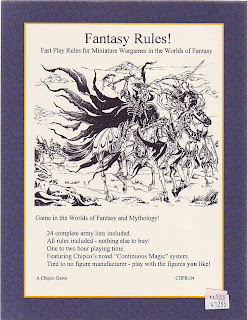 This came to me a huge miscellaneous lot purchased off eBay. Though not really a role playing game it could be sued with one. This is a set of miniature rules for use in a fantasy environment. It was originally published in 1996 and this is a copy of the first edition. The game is now into its third edition and seems to be moderately popular. It has been compared favorably to Warhammer and is said to be better in many ways.

Battle rules for fantasy miniatures, designed for play in around an hour. Players use a point system to construct an army from one of 24 army lists. Armies are composed of units (infantry, cavalry, monsters, war machines, and "specials") and characters (generals, heroes, assassins, necromancers, clerics, shamen, and wizards). A morale clock determines both time of day and the state of the army. Certain characters can cast spells, based on their character type and their army's current pool of magic points. Rules also cover muskets, fanaticism, metamorphosing creatures, spirits, traps, the Undead, fear, flying, elite units, and challenges.