Chill - Haunter of the Moor 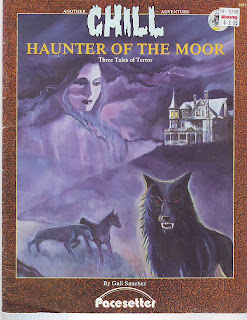 Haunter of the Moor is a Pacesetter offering for Chill that contains three separate adventure. The problem is that unless you want to involve time travel or build a super long campaign involving at least two generations of characters you would not be able to play all three offerings with the same players and not have them create one off characters as the three portions span a century.

The adventures are all well written and fit the classic horror theme of chill well. I could even see this as a setting for a movie or done is a horror themed TV and it playing rather well. As adventures though they would have to be one ups for any ongoing campaign and then you have three time periods to choose from. In the end I would suggest creating ancestors for your players characters and have them play them for the other two portions.

"On the wild, desolate moors of Devon, an icy wind sweeps over the barren heath, chilling the mottled bramble, piercing the granite crags, stirring the deadly mire. At last, the wind dies. But the Evil that summoned it lives on.

Only brave souls dare linger on the moor after nightfall, defying this terror. But courage alone cannot prevail, for the Evil is strong, and over the course of a century, it will seek out its prey.

- a luminous phantom tortures a young Victorian woman, taunting her with mournfoul howls
- a savage beast rips unsuspecting men to shreds as WWII rages overseas
- the haunter of dreams stalks a contemporary woman, who foresees her own brutal murder....

A single place links these horrors: Moorcrest Manor, an isolated Devonshire estate.
And a single hope remains: You. That is, if you dare face the Haunter of the Moor.

Be sure to look for other fine products from Pacesetter."
Posted by Wymarc at 6:44 AM