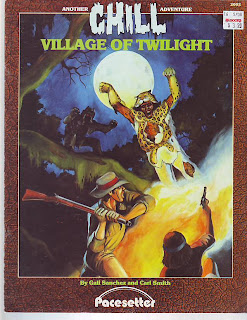 I have a soft spot for adventure/horror settings that involve remote locations. The depths of Africa, the Amazon jungle and their ilk just add to the level of immersion for me. Not only is the adventure dangerous but so seems the locale. This adventure is not quite in the Amazon but it is in the jungles and remote locations in Mexico.Written in 1984 this was not as dangerous as it is today. If you use today as a setting there is a whole other layer that could be added on. This is a fun little adventure (only coming in at 28 pages) that ends up being more than expected.

"Lurking deep within the rain forests of Yucatan, death awaits its next victim. It swallowed the great civilizations of southern Mexico centuries ago, and now it rears its decaying head once again. The ocelotl have returned. The Indians say the evil cat-things roam the jungle even now - the jungle that looms before you.

An unnatural stillness hangs in the air as you stand at the edge of this tangled green world. The jungle beckons, challenging your courage, mocking your doubts, and somewhere, hidden among the twisted trees and hanging vines, the ocelotl are waiting, prowling the outskirts of the Village of Twilight.

"Village of Twilight" is an adventure for use with the CHILL(tm) game system. Inside you'll find the character cards, maps, background information, and hours of thrilling role-playing fun. Be sure to look for other fine products from Pacesetter, Ltd."
Posted by Wymarc at 5:49 AM