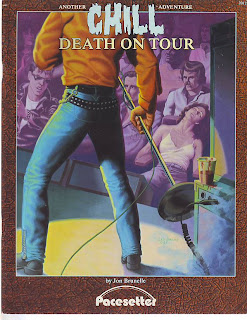 Death of Tour is something that you would have seen on Kolchak: The Night Stalker or in more recent days perhaps on Supernatural. The horror in Chill is much more of a understandable nature than it is in Call of Cthulhu. I have said before that in the end this would make for a better horror campaign game. There is something to be said for not having to reroll new characters every three sessions or so.

The adventure is something fairly simple. A series of vampire murders are following the tour path of a particular band. The question is one of if it it a member of the band or if they have an undying fan base. If horror can be light then this is most likely how it looks. This was released by Pacesetter and I am not sure it was ever ported over to the Mayfair version but it can still be found online on a regular basis.

I'm real glad you're visiting this summer. There's this cute guy named Keith I want you to meet. He's Burt's best friend and it would be great if we could go out together and stuff.

Want to see Jackson Jammer and Van Helsing at the amphitheater? Keith says he can get tickets easy. It'll be AWESOME! Burt thinks Jammer is the best guitarist in the world.

But remember not to say anything to my folks. Those weird concert murders have got them all worked up. Like I'm so sure some vampire is going to bite us on the necks in front of 2,000 people.

Anyway, get down here soon. It's going to be INTENSE!

Turn up the volume: you've just tuned in "Death On Tour," another terrifying adventure for use with the CHILL role-playing game system. Inside, you'll find character cards, maps, background information, and all of the plot encounters you'll need for hours of horrifying fun. Be sure to look for other fine products from PACESETTER, Ltd."
Posted by Wymarc at 6:41 AM