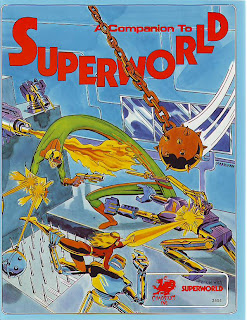 Superworld is a game that I discovered after it had been out for only a short period of time and was very excited about. The problem back then was that there were very few game shops where games could be bought and Amazon was still maybe 30 years or so away. I remember eventually finding a place that sold games and buying a copy of it to play. Imagine my disappointment in being told by the group that I was playing with at the time that they wanted to continue playing Champions. This began a long history of missed opportunities with Superworld....that persist to this day.

The Companion to Superworld is an essential part of the game. It expands the powers and adds alternate rules. It also includes conversion rules for both Champions as well as Villains & Vigilantes. There is even information on Danger Rooms and the effects of weather. I really, really wish I could tell you how these rules played in the game but that is apparently never to be. The system is based on the Basic Role Playing system from Chaosium so I bet it works great.

Also included in the Superworld Companion are conversion systems to Champions and to Villains and Vigilantes, an in depth treatment of weather and weather-related powers in Superworld, and a fully described base with working danger rooms for heroes or villains (usable with Superworld and Champions).