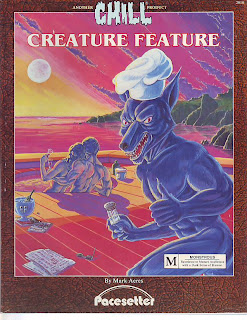 The year is 1987 and you're driving home from just seeing Predator, jamming away to Mony, Mony with your friends. You are talking about being a little bored with the game you are playing right now and want to do something really different. The sole girl in your group Stephanie has an uncontrollable urge to play a game where the players are monsters. It will be three more years before Nightlife is released and four for Vampire. Luckily you have played Chill and Creature Feature was just released.

I am not sure if anything beat this to the punch in allowing players to be the bad guys or not but if so it had to be released before 1987. This was released a both a supplement as well as a rules variant for Chill. It was released under the Pacesetter flavor of the game and I don't think it was redone under Mayfair. It allows for players to be Werewolves and Vampires as well as introducing additional rules. I never used it for the monster play aspect si I am not sure how that plays. I am a fan of all the Chill products and suggest that you get any you can.

.... I just wish someone had not suggested that Stephanie (Meyer) could play a human in the game where the guys all were monsters and that two of them had not been smitten with her. History was befouled that Twilight.

"A NEW GAME for use with CHILL PLUS NEW CHILL RULES!

Part One: The CREATURE FEATURE game. YOU play the creatures in this delightfully weird CHILL game variant.
- Play a werewolf... and bite the hand that feeds you!
- Play a vampire... and put some new blood in your adventures! CREATURE FEATURE is a whole new, fully developed game in 55 dark-humored pages. (You still need the CHILL game to play.)

Part Two: New combat rules for CHILL. Do you know the difference between a .45 and a standard NATO round? Think a spear should be less deadly than a musket when you're playing CHILL or CREATURE FEATURE? Then these are rules you've been waiting for!

Part Three: New slants on S.A.V.E. Now envoys can battle one-on-one with a ghost, beyond the realm of their bodies! At last, S.A.V.E. presents the highly dangerous Incorporeal Disciplines: Seance, Leave the Body, and Incorporeal Attack. It's a whole new form of the Art! You'll also discover new skills and new equipment, and the modern S.A.V.E. organization. Don't-miss reading for every CHILL player.

This book is designed for use with the CHILL role-playing game. Be sure to look for other fine products from Pacesetter."
Posted by Wymarc at 6:57 AM