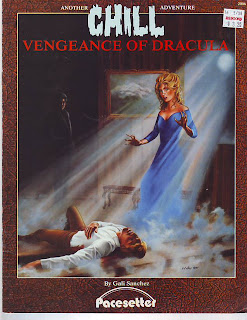 Who does not want to match wits with the grandfather of modern horror villain? This adventure allows you to do so though this is a problem if you are in a campaign. The setting is a mere seven years after the conclusion of the original story. Using this as written will require a flashback set of characters or some serious rewriting of the module. I am a fan of the 1920s as a horror setting which is mostly because the game of choice for horror was Call of Cthulhu for my group. If you Chill campaign is set in that period this would be easier to use though we always played Chill in the modern era or in the 1950 for some reason. The module is one worth having and played though I might use it with premade characters or ancestor characters as a prelude to yet another return in a modern campaign......but not with Dark Shadows (the movie) camp.

"In a Victorian London estate, Mina Harker prepares for slumber — a slumber she fears more than death itself. A wolf begins to growl beneath her window. Count Dracula. Lord of the Undead, has come to call.

In moments, the Count stands before her, immense and cloaked in black. His eyes burn red, like Hell's very fires, freezing her on the spot.

He draws open his shirt, and with his long pointed nail, he slices to a vein in his breast. An icy fluid spurts forth. "Flesh of my flesh, blood of my blood, companion and bride," he growls, drawing her to him. Mina's hair cascades from her face, revealing two crimson marks on her throat.

And so it began. Seven years after Mina and Jonathan Harker helped strike down the Count, he has risen to seek his revenge. One by one, the victims fall, one by one, until... only you... can stop the Vengeance of Dracula.

VENGEANCE OF DRACULA is a spine-tingling adventure that carries on Bram Stoker's original story, DRACULA. Inside, you'll find a chilling tale, character cards, maps, and hours of role-playing fun. Be sure to look for other fine products from Pacesetter."
Posted by Wymarc at 5:01 AM

Another favorite and another very Hammer influenced early Chill product. One of the reasons why I liked this game so much.