Chill - Deathwatch on the Bayou 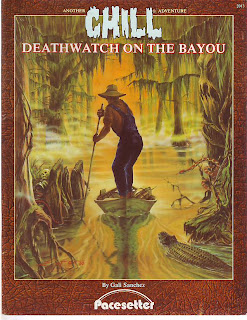 This module was released in 1985 and contains two separate adventures for the Chill game. Being set in the rural areas of Louisiana makes it ripe for roleplaying, on the GM side, in my humble opinion. I have found the more different the NPC is from what would be normal for me and the players the more vibrant the play works out to be. This again though is just how it works out for me and you may find that not to be the case. I have never had a chance to play either of these adventure but I can only imagine they would be amazing to play.

"Deathwatch on the Bayou features two adventures for use with the CHILL role-playing game:
Inside you'll find maps, characters cards, and hours of suspenseful role-playing. Be sure to look for other fine products from Pacesetter." 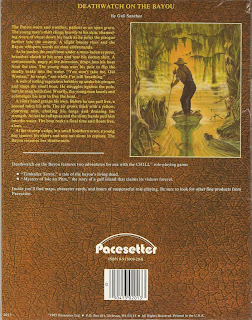