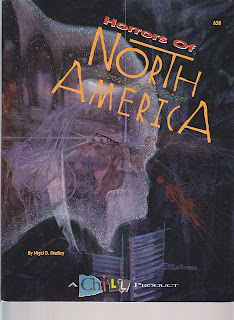 First day back so I won't write too much. I did want to make a post though. This is great source material for creatures that players might not normally think about. I have never compared the list of monsters against ones that were used in the X-Files but I would be surprised if they did not use at least one of them. This was new under the Mayfair line of Chill products. I am not sure if there is a bad product under either offering and this is one that is definitely worth having.

"This 128-page sourcebook/scenario features 18 new Creatures of the Unknown and 15 alarming locations spread across the continent. Chill Masters can have their players' characters travel to Newfoundland, Vancouver, New York, New Mexico and other places and meet horrifying creatures such as the Sasquatch, the Drowned Ones, the Hodag and the Bogy. Localized maps, objects with magical powers and frighteningly real historical information are included.

The scenario, Once Bitten, is for 4 to 8 characters and takes place at a lumber mill in the forests of Oregon."
Posted by Wymarc at 10:18 AM