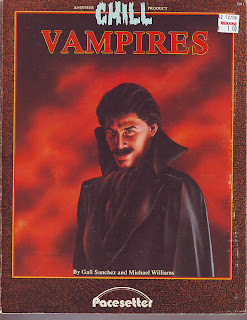 This is the Pacesetter incarnation of the Vampires supplement for Chill. It was released in 1985 and comes in at 96 pages. Inside the covers you will find ten fully fleshed out vampires that can be used in a Chill campaign. The cover for this book has always bothered me a little. Not because it was disturbing in any way but because the vampire on the cover looked a little too cheesy for me. In my mind he looked half porn star and half dandy.It wasn't until the release of The Beautician and the Beast that I realized that he looked way too much like Timothy Dalton (for the record the worst Bond ever). As much as I love zombie movies I have to rank vampires as my favorite horror monster. There is nothing like a cold and calculating undead to make one shudder in fear.

From the back of the 96-page sourcebook:

"VAMPIRES is a collection of stories, portraits, and accounts of ten bloodcurdling creatures who haunt the nights of our legends, the wastelands of our fears. Each of these vampires is not only the center of horrific reports and tales, but is also a fully drawn non-player character designed for use with the CHILL role-playing system."

Not just the best Chill supplement ever, but one of the best Vampire books for a game ever.

I love my copies; both Pacesetter and Mayfair. The Pacesetter one is the better of the two.