1B The Village of Oester, Control Weapon 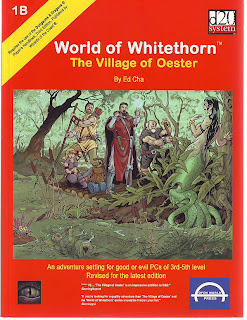 The d20 adventure "The Village of Oester" is the second in the Whitethorn campaign setting. The adventure reads well though I have never had a chance to run it or be run in it. Since it is a 3.x adventure I will most likely never play it as it is or under the system it was created for but the material itself is well done but will not be noted for breaking new ground idea wise. The illustrations and maps are both well done and may be some of the best parts of the layout. It features two parts the journey and then the dungeon crawl. There is a curse, zombies and well written strange NPCs for the party to encounter. The GM may need to get the players some board passes to get them into the adventure though as the motivation for finding the place and investigating are thin to non existent. Still the module could be adapted with some effort though I think if I ever run it I will wing the conversion with some some basic stat block conversions and a little improvisation. Even though this came out in the early part of the last decade it is still seen on a regular basis in the aftermarket. I would pick it up if you can find it at a good price.

If control is attempted on an intelligent magical weapon then not only is the wielder of the weapon entitled to a save and if that fails then the caster is forced into an ego battle with the weapon. If the battle is successful then the caster can control the weapon as the spell would normally allow. Should the caster lose the ego battle they will suffer one point of damage for every point of intelligence the weapon possesses (save for half damage) and the weapon will fall to the ground for the duration of the spell unusable by anyone.

The material component of this spell is a small silver charm in the shape of any common weapon. The charm must be specifically crafted for this purpose. The cost of the charm will be not less than 10gp. The charm is not consumed by the casting of the spell.

Disclaimer: The spells that you will see, for how ever long the write ups last, were all written up back in the 80's so the terminology may not appropriate for anything other than 1e and depending on how well I did back then it may be slightly off for that as well. If there is any duplication of spells that exist now it is most likely I wrote mine first :) Please feel free to comment on them but try not to be too hard on me. If anyone wishes to use these in anything they print please let me know in advance and all I ask is proper credit.
Posted by Wymarc at 6:35 AM