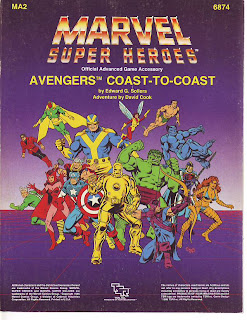 MA2 is a source book for everything Avenger. It covers the original Avengers all the way through the much maligned West Coast Avengers. The Avengers have at one time or another included anyone that isn't a mutant or in the Fantastic Four (Spidey not withstanding though he did try out). There are few stragglers but this will have a darn good portion of the non mutant heroes in it, including today's golden boy Thor! If you want to play Marvel Super Heroes then this is one of the books you will want to pick up. Children of the Atom, Fantastic Four Compendium, Realms of Magic & the Ultimate Powers books would be about every other must have. Still this provides perhaps the best cross section of the Marvel heroes.

When this spell is cast the magic user makes the creature touched totally immune to element chosen when the spell is cast. This immunity extends to naturally occurring forms of the element that would cause the recipient damage. Immunity also extends to any creature, effect, spell or item that is based upon the element immunity is granted to. This means that a person given immunity to earth would not be affected by mineral based poisons, a stone to flesh spell, the stoning affect of a cockatrice, spell effects from a Ring of Earth Elemental Control as well as Earth Elementals. This spell may be cast for any of the four natural elements (Air, Earth, Fore or Water). An individual may only have one immunity on them at any given time. If a second immunity spell is cast on them the first is nullified.

The reverse of this spell is Elemental Vulnerability. This spell causes the recipient to become exceptionally vulnerable to one element of the caster's choice. This will have the effect of causing the victim to take double damage from any normal or magical attack that is based on that element. spells or effects that would normally entitle the victim to a saving throw will not when affected by this spell. The victim of the spell will also suffer damage from exposure to normal instances of the element as well. The damage is slight being one hit point per round of exposure though this is enough to interfere with normal abilities and casting of spells. In game terms for this spell heat over 76 degrees Fahrenheit, any form of precipitation (including fog), winds over five miles per hour will cause damage. For Earth affect any exposure to metals will be enough to cause damage.

The latter casting of this spell entitles the victim to a saving throw and if successful then the spell will have no effect. With the former casting of this spell, but not the latter, the immunity extends to any items or effects currently in place for the duration of the spell. The material components for this spell are a small quantity of the various element and a gemstone, of not less than 50gp in value, that would be associated with that element. Both components will be consumed with the casting of the spell.

Disclaimer: The spells that you will see, for how ever long the write ups last, were all written up back in the 80's so the terminology may not appropriate for anything other than 1e and depending on how well I did back then it may be slightly off for that as well. If there is any duplication of spells that exist now it is most likely I wrote mine first :) Please feel free to comment on them but try not to be too hard on me. If anyone wishes to use these in anything they print please let me know in advance and all I ask is proper credit.
Posted by Wymarc at 6:29 AM