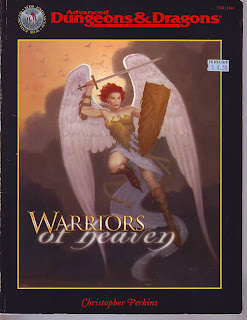 Warriors of Heaven is a product so system mechanics specific that it is out of date with the release of the Fourth edition and is all but useless. It is mostly tables based on the older system and lacks any real quantity of background material. For people still playing 3.0 and to a small extent 3.5 this is still going to be acceptable material. If you are playing an older version of the game, a new version or any other game system this is not going to be something you will want to spend too much money on. If you could get it cheap enough it would be worth picking up just to take a little something from it. If you are looking for a non Planescape supplement dealing with the inhabitants of the higher planes you might be better served grabbing a copy of the old Mayfair Games Sentinels product.

By means of this spell the magic user is able to conjure forth creatures from the Negative Material Plane to do their bidding. This is accomplished by the opening of a of a minor gate to the Negative Material Plane which allows living energy from that plane to seep into the Prime Material and take usable forms. This is unlike the creation of undead as the beings are not truly undead but the energy normally connected with undead beings in a controlled state. The entities crated are not inherently evil in nature.

To determine what form the energy conjured will take the magic user must roll on the clerical turning table. For the purpose of this roll the magic user will be considered a cleric equal to one half their level rounded up. The number of undead conjured will be determined just like the number of undead affected by a turn attempt. This will normally be 1d12 though at higher levels it becomes 6+1D6.

The conjured undead will have all of the normal abilities of the monsters of the same name created in the normal manner except that their alignment will be true neutral. The caster will determine the action of the conjured undead. The actions will last as long as concentration is maintained, the appointed task is completed or the duration of the spell expires. If the caster is opting for concentration and it is lost the conjured beings will continue performing the task they were on and when completed will become inert. They will take no action not even defending themselves against attacks. The caster can reestablish concentration by sending one round doing nothing else and can then command the undead again. When the creatures are summoned the magic user can also assign a simple task  that can be completed in one sentence and this will be done without the need of concentration. When the duration expires or the conjured beings suffer damage equal to their hit points the energy looses for and will return to the Negative Material Plane.

The material components for this spell are a piece of humanoid bone, grave dust and black opal of not less than 100 gold pieces in value. The bone and grave dust are not consumed by the casting of the spell though the opal will. The opal is taken as payment by the powers on the negative Material Plane for use of the energy conjured forth.

Disclaimer: The spells that you will see, for how ever long the write ups last, were all written up back in the 80's so the terminology may not appropriate for anything other than 1e and depending on how well I did back then it may be slightly off for that as well. If there is any duplication of spells that exist now it is most likely I wrote mine first :) Please feel free to comment on them but try not to be too hard on me. If anyone wishes to use these in anything they print please let me know in advance and all I ask is proper credit.
Posted by Wymarc at 6:29 AM