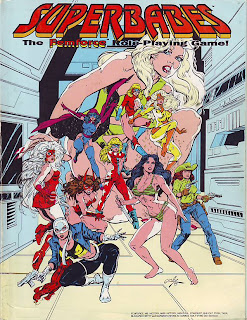 Superbabes - The Femforce Role Playing Game is a hard one to pin down as to what was meant to be and what it is. It was published by Tri-City Games. It is a super hero games based on Femforce from AC Comics. I was an avid comic collector for years but do not recall having any issues of Femforce...based on the cover maybe I should. The game is either even more misogynistic that Mach Women or a true adaptation of a comic that takes a satirical look at the way women are treated in comics. I think it works either way and apparently does a fair enough job of it to warrant a number of supplements and accessories. The game was published in the middle of the 90's so it was a little less demanding period of time though. The game is point based and seems to use skills similar to Champions though with a lot more tongue in cheek names for them. Character are also rewarded in some cases for having lower stats and penalized for having higher stats which I can see might make sense in a comic book world. The game also allows for creating male characters but is obviously geared against that idea. I am not sure that I see this as an option for a long running campaign type game but it would provide an alternative to the more commonly played super hero games. In the end can be totally bad to have a game that gives you a mechanic called Bimbo Points?

The casting of this spell bestows to the recipient total immunity to non-magical melee weapons. This is similar in effect to the spell Protection from Normal Missiles. The recipient of this spell may still be attacked and hit by non-magical weapons but the weapons will do no damage or deliver any effects from attacks that hit.

This spell also grants the recipient immunity to physical attacks by creatures under three hit dice. Attacks by creatures of more than three hit dice are treated normally. Any creature of an undead, magical, supernatural or extra-planar nature will be able to cause damage to the recipient with physical attacks regardless of their hit dice but will not cause damage if normal weapons are used in the attacks.