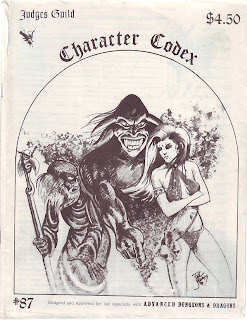 I have always been a junkie for Judges Guild products. This is my second favorite character sheet that I ever used. Top honors belong to a home brew character sheet that was made by the gaming group that my first DM belonged too. He was our high school calculus teacher and would sell them too us for $.10 each. I remember buying stacks of them and still have a handful of the unused one left. This comes in second though. The pack came with 112 so that should have been enough for an entire group except for the fact that these each had an illustration, by none other than Paul Jaquays of a specific class and race combination. The ADD in me would not let me use a sheet for any other option. In addition the sheet had a blank shield where the player could create a Coat of Arms for the character. The sheet was one sided but on the back was a list of equipment and costs. Now as a DM I thought what if my equipments costs are different but it was still a nice touch. If you are looking for some old school type character sheets you could do worse than these and might be hard pressed to do better. Anyone care to share what their favorite character sheet was?

When this spell is cast it causes the intended victim to become encased in a layer of porous but exceptionally strong stone like material. The material will form around the victim causing them to freeze in whatever position that they were in when the spell triggered. The material fists very close to the body but will allow for enough expansion of the chest cavity for the victim to breathe. A successful save means that the victim was not affected by the spell.

The material the victim is encased in is sturdy enough that it will take a complete turn to chip an individual out. The one turn estimate is based on a single person doing the chipping. The total time will be divided by the number of people working on getting the individual out but is round up. For each person chipping at the material the encased victim will take one point of damage per round due to the collateral damage of what is being done to the material. If the victim is actually being attacked the damage is increased to two points per attack but that is all that will get through. When trying to remove them the damage can be avoided but will double the amount of time it takes to free the victim.

Should an individual affected by this spell be attacked with damage causing spells all damage will automatically be halved and a successful save versus magic means only one quarter damage is taken. If the spell normally allows a save for half damage then a successful save means no damage is taken. Spells will also have the effect of causing one round of damage per level of the spell to the material encasing the victim.

The material component of this spell is a small chunk of lava rock or sandstone. The stone is crushed and will be consumed (used up not eaten) during the casting of the spell.

Disclaimer: The spells that you will see, for how ever long the write ups last, were all written up back in the 80's so the terminology may not appropriate for anything other than 1e and depending on how well I did back then it may be slightly off for that as well. If there is any duplication of spells that exist now it is most likely I wrote mine first :) Please feel free to comment on them but try not to be too hard on me. If anyone wishes to use these in anything they print please let me know in advance and all I ask is proper credit.
Posted by Wymarc at 5:58 AM

4th level seems a little high for a spell of such short duration. I would say 3rd level tops. Maybe capping the duration and making it 2nd level even.

I might go with capping the duration and making it a 3rd level spell.