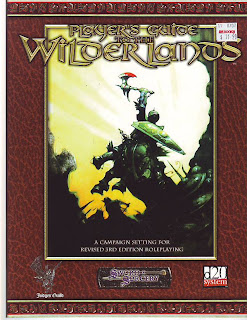 The Player's Guide to the Wilderlands from the reformed Judges Guild is exactly what it says it is. If you want a full blown campaign setting like the original Wilderlands components were you will need to buy a copy of the box set. This though could work as as an excellent starting point if you wanted to build a modified original copy. This book gives the players enough detail to be well informed on the campaign world but that would also be enough for a DM to build off of. The system is stated for the 3.5 version but since not everything is detailed the conversion would not be herculean. The setting is a very much a mash up of Tolkien's Middle Earth, Howard's Hyboria and Leiber's Lankhmar much as the original seemed to be. This is not said as a bad thing as I think most campaign settings are mash ups of previous great ones be they from literature or previously published edition. I recall one of my early one having a conclave of Mentats because I loved Dune so much...but I digress. The map for this is an excellent full color representation of the Wilderlands but not in enough detail to ruin it for the players. The book covers vital topics such as the history of the Wilderlands, The various pantheons of the people, write ups for the various races, highlights of the geography and also offers a number of new classes. I recall only the witch which has always been a personal favorite of mine. In the end for the OSR this is not immediately apparent as something to buy but I think with some work to convert it or for the ideas that can be mined from it this makes a worth addition to a collection.

When this spell id cast the magic user causes the molecular bonds of the affected creature to slow as if they had been subjected to an extreme cold similar to that of outer space though there is no actual change in the temperature of the creature or the surrounding area. The actual effect of this spell will vary greatly based on the type of creature/individual it is cast upon and if their save is made or not. This spell will be ineffective against creatures who would be unaffected by the effects of outer space.

Should this spell be cast on a being made entirely of energy then it will have its most adverse effect. Beings of this nature who have this spell cast on them and fail their saving throw will break apart at the molecular level. If native to the plane the spell is cast on will also break apart and will be unable to reform for the duration of the spell. If from another plane be forced back to it.  In both cases when the creatures reintegrate they will be in a greatly weakened state having only one half their normal hit points and gaining them back at one quarter the normal rate. Creatures who make their save will suffer damage equal to three times the casters level in hit points with no further save allowed.

Material beings who have this spell cast on them will also be required to make a saving throw to see if they are fully or partially affected by the spell. Those who fail their save will suffer the effects of a slow spell with the additional disadvantage of having their To Hit rolls reduced by two and losing all advantages from dexterity if any. It will have the effect of raising their AC by four due to their increased solidity though. Those who make their save are not affected by the slowing aspect nor do they gain the armor class benefit. They will suffer the To Hit modification and lose any dexterity benefit.

Lastly when cast on a creature in a non corporeal state this spell will cause them to become corporeal for the duration of the spell if they fail their saving throw. Those that make their save will be unaffected bu the spell. Those who fail their save will lose all benefits of being non corporeal and can be affected as normal creatures would be including being able to be attacked on this plane. This will most adversely affect non corporeal undead who in addition to the other affects will have their armor class worsened by four and suffer 2d10 in damage from the solidification effect.

Disclaimer: The spells that you will see, for how ever long the write ups last, were all written up back in the 80's so the terminology may not appropriate for anything other than 1e and depending on how well I did back then it may be slightly off for that as well. If there is any duplication of spells that exist now it is most likely I wrote mine first :) Please feel free to comment on them but try not to be too hard on me. If anyone wishes to use these in anything they print please let me know in advance and all I ask is proper credit.
Posted by Wymarc at 7:11 AM