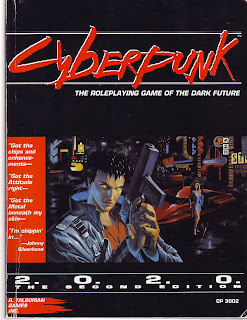 If it were not for Shadowrun this would have most likely been my favorite SciFi game. The dark future setting is one that I have always enjoyed be it Cyberpunk, Shadowrun or even Paranoia. Cyberpunk 2020 is the second edition of the game and cleaned up and simplified many of the rule issues from the first edition. This setting is closer to the genre made famous by William Gibson. The secondary material for the game system is top notch as well. If you are looking for a dark future game and you don't want magic or a psychotic computer looking to ruin everyone's life then go with Cyberpunk.

This spell is cast on a frind or associate of the magic user and when completed an invisible mark appears on the recipients forehead. The mark can only be seen by the caster, the recipient and all others who bear a mark from the same caster and all who see it will know what it means. True Seeing will enable the mark to be seen but will not impart its meaning. Anyone bearing this mark will radiate a minor aura of magic that can be detected by spell or ability.

In addition to the obvious effect of the spell it also has the effect of immediatley alerting the caster and all others bearing their mark when one of the bearers dies. The spell does not alert them to how the person died but it does let them know who died and the approximate location of the persons demise. The knowledge of the persons death will be accompanied by an intense series of pains that will cause 1d4 of damage to all with the mark. Other than the awaremess and the resulting damage there is no obligation to act.

Either mark may only be removed thru use of a Limited Wish or Wish spell or by the free will of  the caster. The caster may not alter the type of mark though they can remove the old one and replace it with a new one.

The material components of this spell are a drop of blood from both the caster and the recipient of the mark as well as a small patch of dog fur for the former casting of the spell. The latter requires a small serpent whos head is crushed under the heel of the caster during the casting of this spell.

This is good stuff! I'm glad I found your blog. I recently did a similar post on my own gaming blog. http://digitalorc.blogspot.com/2011/05/cyberpunk-where-did-it-go.html