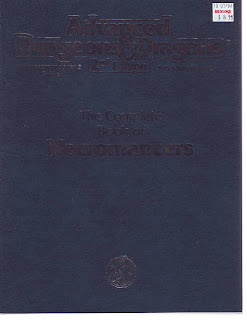 The Complete Book of Necromancers is unless I have missed one the most desirable of all the 2e "splat" books. The intention was not to have Necromancer player characters though. I am afraid it most often got used that way either willing by the DM or eventually under duress from peer pressure. As an NPC class and villain the Necromancer works very well and they could serve as a long term baddie that grows in power and influence with the party members. I have always been a fan of the long running nemesis.I think fantasy campaigns need more Magnetos and Kingpin types. The one advantage is that for a long time this was available as a download from the TSR web site. It was intended to be part of the Core Rules updates but I do not think that software was required. I am not sure if it is still there as I think Hasbro/WotC pulled most content off the web recently. If you can find a copy I would suggest doing so.

This spell when cast will cause any armor worn by the target of the spell to have the same properties as the tentacles of a Rust Monster. This will cause any metal weapons that come into contact with the armor to immediately decompose into a pile of rust. Weapons of a non magical nature will receive no save versus this affect. Magic weapons will require a save versus acid and will have a -1 applied to the save due to the nature of the effect. Weapons will be entitles to a +1 on the save for every plus that they have to Hit.

Another effect of the spell is to cause any damage from a weapon that is affected by the spell to be halved. This is because the weapon is affected before it can do its damage other than the impact.

Finally if this spell is cast on an Iron Golem. If cast on the Golem it will do 1D6+1 per round due to the corrosive effect of the spell. The caster will have to make a successful To Hit roll and touch the Golem. The Golem is entitled to a save and if made will only suffer half damage each round.

The material components of the spell are an iron spike and a small vial of ichor  from the tentacles of a rust monster. The ichor is poured over the spike during the casting of the spell and both are consumed as part of the casting.

Disclaimer: The spells that you will see, for how ever long the write ups last, were all written up back in the 80's so the terminology may not appropriate for anything other than 1e and depending on how well I did back then it may be slightly off for that as well. If there is any duplication of spells that exist now it is most likely I wrote mine first :) Please feel free to comment on them but try not to be too hard on me. If anyone wishes to use these in anything they print please let me know in advance and all I ask is proper credit. In the future this disclaimer will appear at the end of the spell write up.
Posted by Wymarc at 6:50 AM