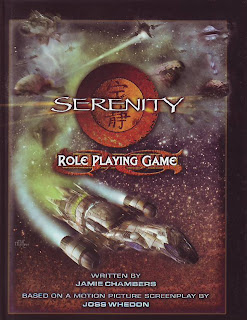 Serenity the RPG is based on the movie by the same name and thus on the TV series called Firefly. I really wish they had called it Firefly but that is being nit picky. Not since the original Star Trek series has such a short lived TV series attracted and maintained such a fan base. I am not a fanatic so as to call myself a Browncoat or anything like that but I am a fan of the show and of the movie that came out as a result of the fans. The RPG does a good job of being faithful to the feel of the show and the existing source material. The presentation is also top notch being full of full color photos from the show and other images. The setting is better than most adaptations based on a TV series or movie in that the characters in the show (other than River) are everyman. They were even on the losing side of the war. This means that the level of expectations and actions that need to take place are not set at the epic Luke/Kirk type of level. The adventures can be more along the lines of a typical D&D game but set in space. An excellent thing since the show had more than a little feel that it was Boot Hill in space. If you are looking for a non d20 Science Fiction game and you want something newer then this is the game for you. That and the base material comes from Joss Whedon so how wrong could you go with trying it out.

When this spell is cast the magic user grants themselves or another of their choice the ability of paralyzation by touch similar to the touch of a ghoul. The individual with spell on them will cause all they hit to save versus paralyzation or become paralyzed when attacking by hand without a weapon. Those who save will only suffer normal hand to hand damage from the attack. Those who fail will suffer the hand to hand damage and will become paralyzed for 3-6 rounds.

This spell may not be cast on an elf nor will the touch of anyone with this spell cast on them have any of the Ghoul effect on an elf. This immunity will also apply to other creatures or beings that would normally be immune to the touch of a ghoul or other paralyzation based effect.

The material components of this spell are a small piece of ghoul flesh as well as a small arachnid or insect (alive or dead) that affects its victims with paralyzation. Both of these will be eaten by the magic user or intended recipient of the spell as it is being cast.

Disclaimer: The spells that you will see, for how ever long the write ups last, were all written up back in the 80's so the terminology may not appropriate for anything other than 1e and depending on how well I did back then it may be slightly off for that as well. If there is any duplication of spells that exist now it is most likely I wrote mine first :) Please feel free to comment on them but try not to be too hard on me. If anyone wishes to use these in anything they print please let me know in advance and all I ask is proper credit.
Posted by Wymarc at 6:26 AM