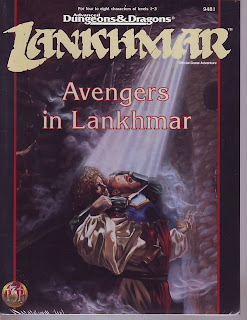 Avengers in Lankhmar was published as a sequel to Slayers of Lankhmar. The first module was LNQ1 but this one did not get a designation. I think this was connected to the full transition to 2e. The purpose of this module is to hunt down the assassin that was introduced in the first installment of the adventure. I have always been fond of the Lankhmar setting and all of the modules for the setting have been worthwhile in my humble opinion. I would of course play the first one in the series (but apparently not write it up) before this one. The module could be adapted to the DM's own campaign with a little effort. It would mean integrating the settings in the city and changing names as appropriate. In the end I do not think you would be disappointed if you were to pick this module up.

When this spell is cast the magic user brings into being small beads of force similar in all ways to the spell Magic Missiles as far as the number and damage they do. In addition to those factors the missiles from this spell will have the effect that when they hit the target the force of the impact will carry them backward in a direct line along the path of the missile. The distance carried will 3" plus 1" per missile.

Creatures carried back in such a manner will continue the full distance unless they are stopped by some intervening obstacle. Individuals stopped by an obstacle will take damage equal to the remainder of the distance they would have traveled just as if they had fallen that distance. The victim is entitled to a save for this damage and a save will result in half damage.  Creatures suffering this impact damage must also make a save versus Petrification or be stunned for 2-5 rounds.

The material component of this spell is a small glass bead that will shatter at the completion of the spell's casting.

Disclaimer: The spells that you will see, for how ever long the write ups last, were all written up back in the 80's so the terminology may not appropriate for anything other than 1e and depending on how well I did back then it may be slightly off for that as well. If there is any duplication of spells that exist now it is most likely I wrote mine first :) Please feel free to comment on them but try not to be too hard on me. If anyone wishes to use these in anything they print please let me know in advance and all I ask is proper credit. In the future this disclaimer will appear at the end of the spell write up.
Posted by Wymarc at 6:24 AM