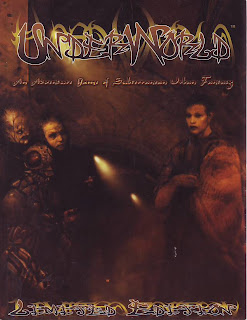 UnderWorld is not a game based on the movies starring Kate Beckinsale or Rhona Mitra but a role playing game of subterranean urban fantasy. The game was released in 2000 by Synister Creative. There have been other games released in what I think is a new genre of role playing since then such as HEX, Dreaming Cities and Neverwhere. Most if not all of these are a direct result of Neil Gaiman's Sandman series. I know the TV show Beauty & the Beast and other stores before it had an affect but I think Gaiman brought it to the fore. The game system is good, the material is excellent but the presentation/quality is lacking. The rules themselves are very simple fitting on basically a single page and it uses a coin flip system (similar to D6 dice pool) for actions. The characters are based on Breeds (9) and then Guilds (again 9 or perhaps it was 10) in the Breed.. They then have Traits and Skills. The real gem of this book though is in the material that can be taken from it for other games. It has a good list of inspirational source materials but the real gem is the Random Adventure Seed Generator that can generate tens if not hundreds of thousands of possible adventure combinations. The game might best be served as source material for a LARP but if you are a fan of the Beauty & the Beast TV show or the Sandman comics you want to look at this.

By means of this spell the magic user is able to generate a field that causes the molecular bonds of all objects in the area of effect to become agitated causing the generation of heat. On metallic objects this will have the same effect as a Druid's Heat Metal spell with the same time frame and effects. Non-metallic objects will also be affected by this spell as well though. There will be a two round delay for the effect to occur but then items will be affected as if they were flammable objects that had come into contact with an ignition source.

Disclaimer: The spells that you will see, for how ever long the write ups last, were all written up back in the 80's so the terminology may not appropriate for anything other than 1e and depending on how well I did back then it may be slightly off for that as well. If there is any duplication of spells that exist now it is most likely I wrote mine first :) Please feel free to comment on them but try not to be too hard on me. If anyone wishes to use these in anything they print please let me know in advance and all I ask is proper credit.
Posted by Wymarc at 6:01 AM