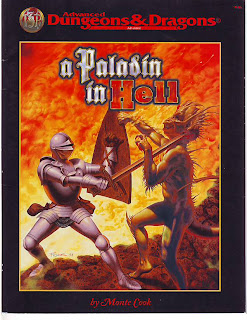 A Paladin in Hell is basically a hack and slash romp through Hell though it does have some parts that require some thought and could provide an avenue for role playing. Fires of Dis was more role playing fare but this is a throw back to the good old days...with devils to boot. It features the grand daddy do devils as the mastermind and has a cameo by an Greyhawk alumni so it is loosely tied to that setting though it would be easy enough to lay a quick claim deed on it for your own campaign. The module is going to be tough though and will test the metal of even well equipped and played characters. In addition to the adventure it provides data on how spells will or won't operate in the Hells. For those that do not have access to the Dragon articles on the subject that alone will make it useful. All that and homage to one of  the most memorable pieces of art from the 1e PHB.

This spell when cast on the target item causes it to become for all intents and purposes a timebomb. The enchanted item can be given away or left for someone to find. It will ot go off until either the command word is spoken by the caster (regardless of distance though they must be on the same plane), the duration of the spell expires or a predetermined set of circumstances is met though these must be easy definable such as it is moved more than 100' from the point it was placed at.

Regardless of the criteria that it is set for when it does off the person in possession of the present will take damage equal to 2-5 points per level of the caster with no saving throw allowed. Those in the vicinity but not in possession will take a reduced amount of damage  and are entitled to a saving throw for half damage. The damage will be reduced by two levels worth of damage per 1" they are distant from the item when it goes off.

Should the device be triggered indoors and the area it goes off in is too small for the effect to fully dissipate before it hits the walls then the walls will suffer i point of structural damage for each level of effect that could not dissipate.  If the room is affected all in the area will need to roll under their dexterity with a -2 modifier. Those who fail this roll will suffer 2d4 of damage from debris hitting them.

The sole material component of this spell is the actual item that is to become the birthday gift. The item will be destroyed when the spell discharges.

Disclaimer: The spells that you will see, for how ever long the write ups last, were all written up back in the 80's so the terminology may not appropriate for anything other than 1e and depending on how well I did back then it may be slightly off for that as well. If there is any duplication of spells that exist now it is most likely I wrote mine first :) Please feel free to comment on them but try not to be too hard on me. If anyone wishes to use these in anything they print please let me know in advance and all I ask is proper credit.
Posted by Wymarc at 6:19 AM