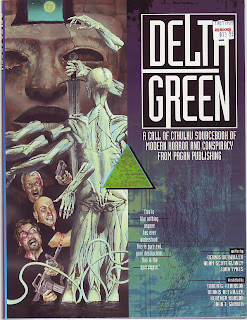 Delta Green from Pagan Publishing is an award winning campaign setting for the Call of Cthulhu. It takes place in the modern (1990s) era but the setting has a rich and detailed back story. The Delta Green organization was founded after the incident at Innsmouth mentioned at the end of  Lovecraft's "Shadow Over Innsmouth". The group draws upon elements of most if not all the standard fare of governmental organizations (FBI,CIA, DEA, ATF, CDC etc) but is not one that operates in the light or with public knowledge. This idea in and of itself (very much like the SAVE group from Chill works to help support the campaign as it gives new or replacement characters an in. There are many like myself who want to compare this to the X-Files and and say that it must have spawned from that. The comparison is a fair one though even with the depth of Delta Green its mythology is easier to follow than the X-Files. The fact of the matter is that the first mention of Delta Green, from The Unspeakable Oath, predates the X-File for about a year. It will take some serious reading an has a bit of a learning curve but if you want a well thought out and detailed campaign setting for your CoC or any horror/modern game this would work for you.

This spell allows the caster to heal damage that they or another may have suffered to be healed. Damage that can not normally be cured through clerical based healing will also not be able to be healed by this spell though. The spell opens a very minor channel to the Positive Material Plane and then using themselves as a conduit to direct the energy into the recipient. The amount of damage that can be healed by use of this spell is dependent on the level of the caster as higher level casters can maintain the a larger channel for a longer period of time. The caster will heal an amount equal to their level plus a random amount. The amounts that can be healed and the casting times at various levels follows:

The reverse of this spell will by means of opening a channel to the Negative Material Plane cause an amount of damage equal to what would be healed at the same level and will have the same casting time. The reverse entitles the intended victim to a saving throw. The save if successful will mean that the victim only suffers half damage. If the caster misses the To Hit roll or if the intended victim makes their save then the caster will take the remainder (or whole amount) of the damage due to the negative energy remaining in their bodies.

Disclaimer: The spells that you will see, for how ever long the write ups last, were all written up back in the 80's so the terminology may not appropriate for anything other than 1e and depending on how well I did back then it may be slightly off for that as well. If there is any duplication of spells that exist now it is most likely I wrote mine first :) Please feel free to comment on them but try not to be too hard on me. If anyone wishes to use these in anything they print please let me know in advance and all I ask is proper credit.
Posted by Wymarc at 9:02 AM