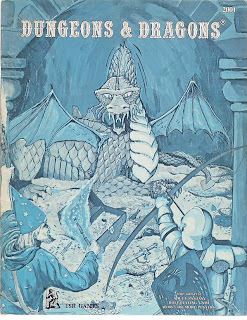 I won't spend a lot of time writing about this as it is being reviewed in great detail right now and has been discussed at length in many others. This is not the one that began it all but for many it was the one that began it for them. I came in at the tail end of this and the release of AD&D. My first character was rolled using the AD&D Players Handbook but this is the first book I read on the game. It was lent to me by our first DM who was our high school calculus teacher. I know I poured over this again and again just amazed at the concept of it as a game and enthralled at the effect it had on my imagination. I still have at lest one copy of this within easy reach almost all the time. This may not be my favorite edition of the game but it is was my first D&D rulebook I was able to read (the first I bought was the AD&D PHB) and we always know how we adore our firsts.

This spell has two distinct version of it that may be cast. The first will cause the area effected to act as a crystal ball to any area that the caster has ever seen or been to. The second will create a reflective surface that will show all on it in their true form. Either spell may be cast but the version is determined at the time of casting and it may not be changed once cast.

An area affected by the first version will in all ways act as the basic version of a magical crystal ball. The exception to this is that it is limited to places. People may not be the default subject though people in the area specified will be seen. Individuals of a normal nature will will not be able to detect that they are being observed but magical, supernatural or extra-planar being may do so as per standard rules for this. There is a 10% chance per round that any being that has detected that they are being observed will then be able to view those who are observing them through the mirror but the caster is immediately aware of this. Most creatures will despise being viewed in this manner and will have a 25% chance to become fixated on finding those who viewed it.

The second version of the spell will show any who are reflected on their surface as they really are. This will affect illusion, polymorphed creatures, petrified creatures as well as showing any who are invisible. Naturally invisible creatures will be seen as a smokey silhouette. Supernatural beings in their natural form will be seen with an aura surrounding the form. The mirror will also cause creatures passing by it on the Astral or Ethereal plane to be seen on its surface.

Another effect of the second version is that it will cause normal beings who are looking at the mirror from the caster side to see what their spirit or soul would look like if it could be seen. This will happen if more than one turn is spent looking at the mirror. For all intents and purposes their sins and true nature are being laid bare to them. Those who see their inner being must make a saving throw versus spells. Good aligned beings will save at +2, Neutral aligned save normally and Evil aligned save at -2. Those who fail the save are stunned and stare transfixed for 2-5 rounds and then must save again and those who fail will flee the presence of the mirror.

The material component for this spell is the same regardless of the version cast. The component is a small silver mirror which will shatter at the end of the spells duration or upon it being dispelled.

Spell Commentary: I had forgotten about the second effect of the second casting until I was typping it in. I have always thought the idea in Shallow Hal was neat. Now I see why. Wonder if my idea was poached?

Disclaimer: The spells that you will see, for how ever long the write ups last, were all written up back in the 80's so the terminology may not appropriate for anything other than 1e and depending on how well I did back then it may be slightly off for that as well. If there is any duplication of spells that exist now it is most likely I wrote mine first :) Please feel free to comment on them but try not to be too hard on me. If anyone wishes to use these in anything they print please let me know in advance and all I ask is proper credit.
Posted by Wymarc at 7:33 AM