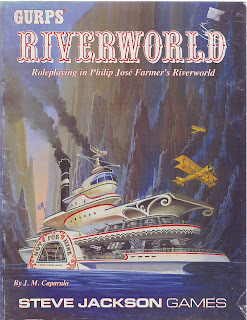 GURPS though not the best system overall does what it is supposed to do. It is open enough to allow for any setting to be played under it. It might even be suggested that in today's litigious society that SJG could sue TSR/WotC for patent infringement with the idea of D20.The settings available under GURPS is nothing short of amazing. I have many but not all and I think at last count I had 59 different settings or World ideas and  maybe half that again in supplements.

The one I am putting up today is Philip Jose Farmer's Riverworld. For those not familiar with the story I can not recommend it enough. Do yourself a favor and do not watch either of the made for TV movies the ScyFy Channel released though. The premise is simple enough to start with...everyone who has ever lived wakes up on the planet after dying....but all at about the same time. It is a river ranging from a few hundred yards to maybe more than a mile wide in points. There is more too it than that and the story is the quest by a the protagonists to uncover the mystery and more than that. I won't spoil it more than I have. There were three books in the original series though I think one or may two more have been written. This world would pose a great collaborative fiction setting if allowed.  The game is very good the books are great. Both deserve a place on your shelves.

This spell is in all ways similar to the singular variety of the spell except for casting time, creatures affected, the addition of a somatic component and an additional material component. The somatic portion is the designation of the desired targets and the material component is a gem of no less than 100gp in value for each creature over the first that is to be affected. The gem is consumed with the casting of the spell.

Each creature that is targeted by the spell is entitled to an individual saving throw. This has the same limitations of the original spell with additions based on the targets affected. The first creature to make a save attempt makes so as per the standard spell. If they fail then the next target is at a -1 or if the first person saved then they are at a +1 and so on down the line.

Disclaimer: The spells that you will see, for how ever long the write ups last, were all written up back in the 80's so the terminology may not appropriate for anything other than 1e and depending on how well I did back then it may be slightly off for that as well. If there is any duplication of spells that exist now it is most likely I wrote mine first :) Please feel free to comment on them but try not to be too hard on me. If anyone wishes to use these in anything they print please let me know in advance and all I ask is proper credit.
Posted by Wymarc at 6:26 AM