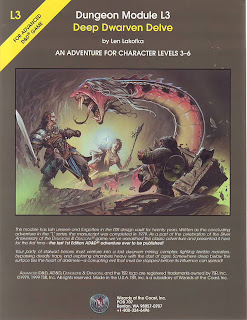 L3 was listed at one time as the last official 1e release by TSR. I am not sure if this is still true but it most likely is. This module has a long and storied history that eventually led to it being released in the Silver Anniversary product. It was originally written and run as a tournament module in 1979. It was then converted over to be third in the L series and released as such through normal channels. For whatever reason this did not occur and the module languished in the vaults at TSR. When the decision to publish the Silver Anniversary product was made it was decided that L3 would be included. Apparently though the vaults at TSR were not safe or very disorganized because the module was not complete when it pulled out to be published. It had to go through a rewrite and based on reports from Len Lakofka it is only about 80% of what was originally intended. He has also released L4 through Dragonsfoot. The module can of course be found in the Silver Anniversary Boxed Set but it can also occasionally be found for sale individually on eBay.

By means of this spell the magic user may cause up to six creatures to be affected in all ways as if a Polymorph Other spell had been cast on them individually. The caster is limited in the number of creatures that the recipients can be polymorphed into though. The caster can choose up to three creatures for the recipients to be changed into but the division is determined solely by the caster. If the recipient of the spell is willing then the saving throw is not required.  In all ways the effect will be the same as the Polymorph Other spell and will have the same material components though one set of components is required for each creature type the caster selected.

Disclaimer: The spells that you will see, for how ever long the write ups last, were all written up back in the 80's so the terminology may not appropriate for anything other than 1e and depending on how well I did back then it may be slightly off for that as well. If there is any duplication of spells that exist now it is most likely I wrote mine first :) Please feel free to comment on them but try not to be too hard on me. If anyone wishes to use these in anything they print please let me know in advance and all I ask is proper credit.
Posted by Wymarc at 10:22 AM