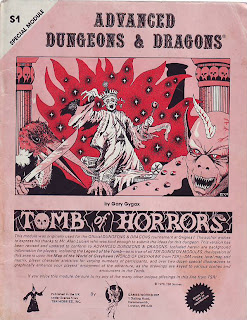 If the tomb of Horrors is not the most infamous module of all time it ranks very close to the top. I regret to say that I myself have never been run through this. I have run in many times and each time the expected happens....someone dies. Sometimes when writing posts I come up with random ideas....I think someone should collect all the horror stories of how their characters died in the Tomb of Horrors and publish it. I am fairly certain it would sell well...at least among the old guard. In fact it could be called "Death in the Tomb...the Horrors of it All"...I am officially laying claim to the idea and that title.  This copy is complete but a little beat up. It is also the Games Workshop edition which makes it rarer than the standard monochrome edition. I have never compared it line by line as far as text goes. It does use black for the maps rather than the TSR blue...I prefer the blue myself. I really regret having run this before I ever had a chance to be run through it. I would like to see just how I did in figuring things out. I suspect I would not have made it through all the way. I find that as a player I tend to take more risks that I would normally let my players get away with. It has been suggested to me (and I think I said this before) that I am not an easy player to DM/GM for. The Tomb is a classic example of the first edition modules if not the archetype and a copy needs to be in everyone collection.

With the casting of this spell the magic user places a single charge Teleport spell inside a ring to be worn by themselves or another.  The teleportation effect will return the wearer only to the location that specified when the spell was cast on the ring. This rings effect may be triggered on command or by a specified event trigger (i.e. the wearers death, psionically attached, being petrified etc.).

When the triggering event occurs or the command word is spoken by the wearer then they will immediately be teleported to the location determined in the original casting of the spell. Any attempt by anyone other than the wearer of the ring to remove or destroy the ring will also trigger the teleport spell. It is important to note that the wearer may not have more than two of these types of rings on at any given time. Each of which must have different trigger events, if any, though they can go to the same location. These do not could against the number of magic rings a character can wear at any given time.

The material component of this spell is the ring which must be of at least 1000 gold pieces in value. The ring is destroyed when the spell effect occurs.

Disclaimer: The spells that you will see, for how ever long the write ups last, were all written up back in the 80's so the terminology may not appropriate for anything other than 1e and depending on how well I did back then it may be slightly off for that as well. If there is any duplication of spells that exist now it is most likely I wrote mine first :) Please feel free to comment on them but try not to be too hard on me. If anyone wishes to use these in anything they print please let me know in advance and all I ask is proper credit.
Posted by Wymarc at 7:08 AM