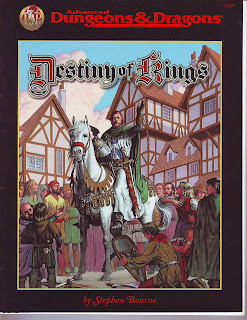 This is the 2e edition of the module "Destiny of Kings" which was originally published under the first edition as N3. The modules are basically identical except where changes were made to bring the reprint into line with the newer editions rules. I will speak about them interchangeably for that reason. The plot reads like a script from history books. The King is assassinated and the brother seizes the crown because the Prince is missing. The players come in when they are asked by someone loyal to the Prince to locate him and help him ascend to the throne as was destined. The module overall is fairly well done and contains a number of different locals for the players to explore including a castle. It might be a little light on Machiavellian intrigue but it is hard to fit back story, stats, location and plot into a 32 page module.  I would think that this version or even better the earlier version that had Parkinson art on the cover might be the better option though the later version might be cheaper to pick up. If you loved Hamlet and enjoy the court politics in Braveheart you should like this.

When this spell is cast it causes all invisible creatures or items in the area of effect of the spell to become visible to all other creatures in the area of effect but they will remain invisible to those outside the area. This will affect all types of invisibility spells as well as invisibility that is granted through the use of magic items. It will not affect creatures or items that are by nature invisible nor does it affect the thief's Hide In Shadows ability. There is a fifty percent chance that this spell will make visible those who are invisible by psionic means.

The spell is centered on the caster and will move with them. This will possibly cause items or creatures to to pass in and out of invisibility as the enter and leave the area of effect. Creatures that pass out of the area of effect will have any minuses to be hit halved as the attacker can possibly predict the action and direction of the creature.

Disclaimer: The spells that you will see, for how ever long the write ups last, were all written up back in the 80's so the terminology may not appropriate for anything other than 1e and depending on how well I did back then it may be slightly off for that as well. If there is any duplication of spells that exist now it is most likely I wrote mine first :) Please feel free to comment on them but try not to be too hard on me. If anyone wishes to use these in anything they print please let me know in advance and all I ask is proper credit.
Posted by Wymarc at 8:58 AM