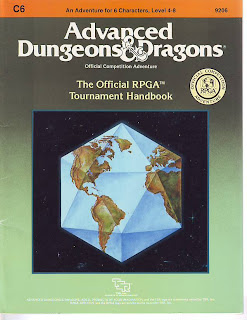 This may be the single 1e item that I have found the least use for. I am not saying it is a bad item but I have never run an RPGA Tournament nor have I been run in an RPGA Tournament. I guess that is more of a failing on my part than of the nature of the item. It does have the rules which I am sure or so out of date it is not funny. It does include two sample scenarios which can be used as adventures even if not being part of a tournament. The adventures, as I recall, were interesting enough both of which in addition to the normal adventuring issues had situations where the players had to make tough decisions or figure things out before it was too late. For a completest it will be a must have. For everyone else it is something that is OK for the adventures if you can find it at a reasonable price though you could live your entire gaming career and never have need to open it.

Disclaimer: The spells that you will see, for how ever long the write ups last, were all written up back in the 80's so the terminology may not appropriate for anything other than 1e and depending on how well I did back then it may be slightly off for that as well. If there is any duplication of spells that exist now it is most likely I wrote mine first :) Please feel free to comment on them but try not to be too hard on me. If anyone wishes to use these in anything they print please let me know in advance and all I ask is proper credit. In the future this disclaimer will appear at the end of the spell write up.

With the casting of this spell the magic-user brings into being, at the specified range, a cloud of acidic mist with the stated measurements. The effect of this cloud will be to cause 3D6 of damage to all who are inside it at the beginning of any given round. In addition to the physical damage the cloud will cause all caught in it to make a saving throw versus magic or be blinded for 1-4 round. If the save is made the victim is not blinded and will only take half damage for the round. Those who fail their save will suffer a -4 to all attacks and future saves while in the cloud. Those who make the save will still suffer a -2 to attacks, though not saves, due to irritation and damage to exposed portions of the body. The damage and periods of blindness are cumulative though the minuses to attacks and saves are not.

This will also have the effect of causing all non-magical metal items caught in the cloud to make a single saving throw for the entire time they are exposed. This save will be versus Acid and will be made at a -2. The items will not be destroyed but will be damaged so that they are at half effectiveness or rendered useless, because of the minor structural damage they have received, until repaired or have had a Mending spell cast on them. Metal items not normally affected by acid or inside bags and pouches will not be affected. The material component of this spell is a small vial of acid that must be poured onto an exposed flame during casting.
Posted by Wymarc at 8:28 AM

Although I have never used the RPGA tournament either I did find it an interesting read. You discover that tournaments are 10 rooms strung together and the tournament is scored by how many rooms the player get through a fixed time. Once you also realize that most early modules started life as tournaments, you begin to understand why many of the early modules are linear party killers.