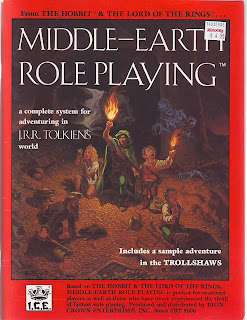 Middle Earth Role Playing (MERP) was released in 1984 and I had a copy as soon as I knew it existed. This is either my second or third copy of the first edition rulebook. I had previously purchased the Middle earth setting product that I posted about earlier. This is one of those things that could have been a phenomenal success or an abysmal failure as most licensed products can be. This was the former rather than the latter much to my and based on the line it produced many others enjoyment. I would think that MERP would still be in production today if ICE had not lost the license in 1999. If there was any negative from the movies this had to be it. I know Decipher has since let the license lapse and I am not sure who if anyone owns it now. The system is a fairly straightforward adaptation and scaled down version of Rolemaster. The game even though scaled down was not a beginner friendly game and it had too much magic in it which for most role playing games is unavoidable. The real gem from the system are the location modules which may be some of the best done accessories ever produced.

By means of this spell the magic user brings into being one porter for every three levels of experience they posses. These porters will appear to be normal humans, demi-humans or humanoids of the casters choice and may be mixed if desired.  The porters will stand out though as they will have no discernible facial features and will be surrounded by a glow similar in appearance to Farie Fire. The porters are actually lesser beings of pure force brought forth from the Prime Material Plane under control of the caster.

The porters will be totally unaffected by physical attacks on them while on this place though the items they carry may be affected. They are also immune to all magical attacks except for a dispel magic which will send them back to the Positive Material Plane though they are entitled to a save as if they were the caster to prevent this. If sent by by use of Dispel Magic any items that the porters might be carrying will return with them. The porters are also unable to affect anything on this plane other than the objects that the caster has instructed them to carry.

Each porter will be able to carry a base amount of 5000 gp weight plus an additional 1000 gp weight for every level of the cater above third. The porters will be able to understand commands given to them by the caster, and only the caster, regardless of the language used. These commands will be obeyed and followed unerringly to the literal letter as the porters have no means to interpret the meanings and intent of any orders given to them.

The material components for this spell are a drop of the casters blood and a pouch of five gold pieces for each porter summoned. The blood is consumed at the casting of the spell and the pouches vanish with the porters when they return to the Positive Material Plane.

Disclaimer: The spells that you will see, for how ever long the write ups last, were all written up back in the 80's so the terminology may not appropriate for anything other than 1e and depending on how well I did back then it may be slightly off for that as well. If there is any duplication of spells that exist now it is most likely I wrote mine first :) Please feel free to comment on them but try not to be too hard on me. If anyone wishes to use these in anything they print please let me know in advance and all I ask is proper credit.
Posted by Wymarc at 6:03 AM

Great, timely post. We just dug our our MERP books recently and were pondering playing it. The maps for MERP are still among the best I've ever seen.

Hmmmm. I loved the artwork, and loved the research in it, and... I found it very much not user friendly. I even did a review of it and was shocked to find it only scored 4 out of 10 to my own well thought out (?) standards.

Still, maybe because of Tolkien, and because it's at least closer to the spirit of his works, I keep paging through the game now and then.

The maps and art are great. I wish I could recall the blog that is publishing some of the older maps. I follow it but can't recall the name. Angus McBride is a great artist. I think he did much of the art as I recall. The mechanics of the game can be a little cumbersome. I think that is why near the end that they released a lighter version of the game.