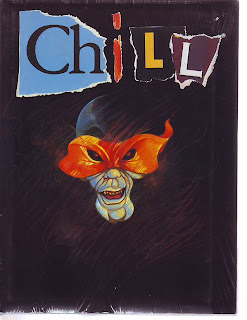 Chill was originally published by Pacesetter and then picked up by Mayfair. The edition pictured is the Mayfair edition though I have the earlier edition somewhere, just not scanned yet. I actually like the core rulebook for the Mayfair edition better for ease of use. Though the source books for the first edition get the nod when looking at supplemental material. Chill was the fallback horror game in our group after CoC though if we played horror for any extended period of time I think we would have fallen into playing Chill more. This may sound strange and not be a plus to some but it is a less dark horror game in that the baddies are less global and more what you think of as classic horror. Chill is a simple enough system though as I recall there were time when combat drug on a little bit. The system is well supported in both editions and Mayfair even published a board game based on the system but then again what else would Mayfair do :) In the end if you are looking for an alternative to the Elder Gods as prey or opponents why not join up with Societas Argenti Viae Eternitata and help save things on a smaller scale.

By means of this spell the caster is able to cause the next spell to be cast on the recipient to have the maximum possible effect. If it is a spell with multiple options as far as effects got then the recipient can choose the one they desire. This spell is triggered by any spell cast on the recipient, even spells that or damaging or hostile in nature. This means that the maximum amount of damage is caused though normal saves are still allowed. If the harmful spell has variable effects then the recipient gets to select that as well. For the purpose of this spell magical effects from wands and the like will be considered spells.

The reverse of this spell is Minimization. When this spell is cast on an individual then the next spell cast on them will have the minimum possible effect for that spell. If there are multiple options then the least favorable option will be the one to occur. As with the former casting of the spell it will be triggered by any spell or spell effect regardless of the caster or thir intention.

Disclaimer: The spells that you will see, for how ever long the write ups last, were all written up back in the 80's so the terminology may not appropriate for anything other than 1e and depending on how well I did back then it may be slightly off for that as well. If there is any duplication of spells that exist now it is most likely I wrote mine first :) Please feel free to comment on them but try not to be too hard on me. If anyone wishes to use these in anything they print please let me know in advance and all I ask is proper credit.
Posted by Wymarc at 5:54 AM

If Call of Cthulhu is the "Hammer Horror" of RPGs, then Chill is the "Universal Monsters" of RPGs.

I can see that comparison.