B3 - Palace of the Silver Princess, Shadow Assassin 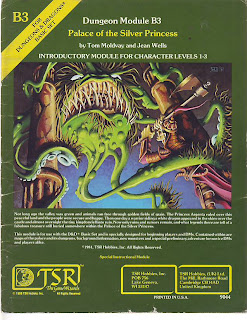 Normally the color of the module or the various printing does not make as much of a difference in value as it does this particular specimen. If you are not sure what I am talking about you can find a excellent discussion on it over at the Acaeum. If you want to check out for yourself what all the hubbub is about and can't wait for one to come up on eBay (though there are two right now) ...or have $1,500 bucks to blow you can still amazingly download if from the WotC site here. I don't have a real copy of the Orange edition and most likely never will but the PDF has allowed me to compare them and I overall prefer the modified version. I did like the ability in the original for the DM to customize it more like B1 but that can be done regardless of it being built into the module. I will say that this module won't make my top 20 and it would be rare for it to make anyone's unless they don't have a large enough pool to draw from. In the end it was an average module that through fate has become one of the most storied collectibles in the industry...not this version though.

By means of this spell the magic user causes the shadow of the spell's target to become a self willed entity. This spell can target any human, humanoid or monster that is visible, has a tangible form and casts a shadow. The sole purpose of the shadow will become that of killing the creature it is a shadow of.

Once the spell is cast the Shadow Assassin attacks its target with complete surprise getting a +4 bonus on their To Hit roll. It makes the To Hit roll as an assassin equal to the level of the the intended victim up to a maximum of a tenth level assassin. If this attack is successful then there is a normal percentage chance of the hit being a successful assassination as per the Dungeon Masters Guide. If it is not an assassination then then normal damage is suffered including any multiples for being a back stab. The weapon used will be what was in the hand of the victim or a dagger if none was present.

This spell is accomplished by infusing the victims shadow with essence from the Plane of Shadows (the Negative Material Plane can be used as an alternate if desired). It should be noted that casting this spell more than once in any given game week will have a 50% chance of drawing the attention of other inhabitants from the plane and their wrath. If there is notice made a second Assassin will come through with it's target being the caster. The chance goes up 10% with each additional casting until one week has pased since it was last cast.

The material components of this spell are a small black cloak and an obsidian dagger. Both of these can not be of less than 100 gp in value. The spell also requires a small vial of blood from a living assassin. The blood is consumed by the casting of the spell though the cloak and dagger remain.

Disclaimer: The spells that you will see, for how ever long the write ups last, were all written up back in the 80's so the terminology may not appropriate for anything other than 1e and depending on how well I did back then it may be slightly off for that as well. If there is any duplication of spells that exist now it is most likely I wrote mine first :) Please feel free to comment on them but try not to be too hard on me. If anyone wishes to use these in anything they print please let me know in advance and all I ask is proper credit.
Posted by Wymarc at 8:28 AM