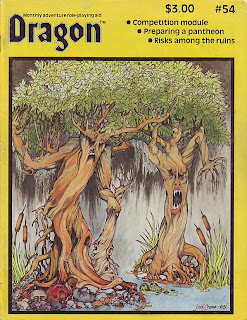 I try to not use issues of Dragon magazine too much. I will use them sparingly and only when they have some significance to me or stand out for some reason. Issue #54 is one of the ones that stand out in my mind. This issue very much IMHO could be the benchmark for why Dragon Magazine back in the early days was so good. This issue has "Cavern Quest" which is a competition module. I will not say it was the best module they ever used but I liked it because it was different. The next item of note was the write up on how to create a DM designed mythos even though it was, unbeknown to me,  from the setting that would later replace my much beloved Greyhawk as the default TSR game world. The next item of note is one of the two best parts of the issue. This is the multipage write up on Ruins and how to construct what is in them. I may have used this article as much as any I ever read during my early DM days. Next there is a great article on "Weapon Dame"....not to the victim but to the weapon and with fumbles. I did not implement that but it was mined for ideas. Next comes a write up of the Jabberwock which was just it for me as far as monster write ups. There is also an expanded write up for Boot Hill dealing with price lists and equipment and the final episode of Finieous Fingers for Dragon Magazine. The best though was the short fiction called "Abomination" by D. Aaron Achen. I won't spoil it for those that have not read it but there are few short fiction pieces I remember almost 30 years after first reading them. Do they still make gaming magazines this jam packed with worthwhile material? If so can someone tell me the name of them.

With the casting of this spell the magic user brings into being a number of physical replicas of themselves. There will be 2-5 replicas created for each casting of the spell. Each replica will be free acting and will not require any direction from the magic user but will know immediately what the caster would and will want done as soon as the caster thinks it. The replicas will have non-magical version of any equipments that the caster may have but these items will have no special abilities. It should be noted that the replicas will have working copies of any material components in the casters immediate possession.

Disclaimer: The spells that you will see, for how ever long the write ups last, were all written up back in the 80's so the terminology may not appropriate for anything other than 1e and depending on how well I did back then it may be slightly off for that as well. If there is any duplication of spells that exist now it is most likely I wrote mine first :) Please feel free to comment on them but try not to be too hard on me. If anyone wishes to use these in anything they print please let me know in advance and all I ask is proper credit.
Posted by Wymarc at 6:08 AM

This is my favorite issue of Dragon for all of the reasons stated. I still have my original (and tattered) copy. I've reread Abomination a zillion times over the years.