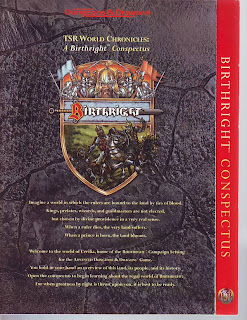 The Conspectus series was released in the middle of the 1990's by TSR as a means to let people know about the various game worlds that they published for. I do ot recall where i picked them up...if it was at a FLGS or at conventions. They were all really nice but I think the best of them was probably the one released for Birthright. Other than the Mystara setting I am not sure any other setting has received as well done write ups as the Birthright setting has. The Conspectus gave us not only a poster sized map of the realm but also supplemental information about the realm. This along with all of the other items in the Conspectus line are worth picking up.

If all of those to be affected are in contact either directly or through a chain of contact then the number is limited to all that can fit within a 1" diameter of the caster provided they are in contact and willing to be teleported. If the spell is being used at then the number affected is equal to one person/being for every two levels of the caster. Those who are not willing participants in the teleportation are entitled to a save and if this is made they are unaffected.

The weight limits that exist on the singular version of this spell exist per individual in this version as well. The effect is measured per person and not as a group so any excess allowance is not carried over to others.

Disclaimer: The spells that you will see, for how ever long the write ups last, were all written up back in the 80's so the terminology may not appropriate for anything other than 1e and depending on how well I did back then it may be slightly off for that as well. If there is any duplication of spells that exist now it is most likely I wrote mine first :) Please feel free to comment on them but try not to be too hard on me. If anyone wishes to use these in anything they print please let me know in advance and all I ask is proper credit.
Posted by Wymarc at 5:50 AM