The Sword of Justice, d20, Comfort 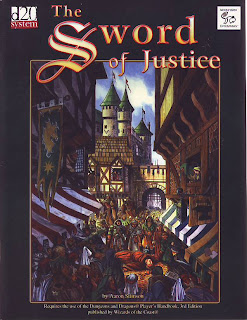 The Sword of Justice published by Monkeygod Enterprises in 2002  is a D20 adventure designed for 1st and 2nd level characters. The  premise of the module is one that has not been used in the form  presented bt the underlying theme has been used before. The  module works better beig designed for lower level characters than  it would if it were being used for higher levels.

The premise is fairly straightforward. The party is accused of a  murder which they did not commit. They are given two days to  prove their innocence. In most cases a "Speak with Dead" spell or  any other spell along that line would solve the problem. The  problem is that in Om Amarna spell casting in prohibited in  public and a curse causes many spells to backfire does not allow  for this.

The adventure does not have an part that the players have to go  through in order. The module consists of a series of encounters  and location that the players could run into while trying to  prove their innocence. The city itself is fleshed out enough for  the adventure and could be used in the future though I don't  think I would use it as a base of operations. The module includes  a means of tracking travel time within the city so as to keep the  two days idea part of the adventure.

The module introduces a new race the Arocha along with what seems  to be the required d20 prestige class. The writing is done well  enough though I am never one to really judge on that. I want the  idea and some stat blocks and the rest I often find myself  winging. There are some serious plot holes and the GM will need  to work through or around these.

Overall it can work as provided as a one shot but even then would  need some tweaking. I am not sure it would fit well into an  existing campaign unless it was reworked by the GM some or he had  a section of the world this could just be thrown into without  disrupting the rest. When released the price was $13.95 so it was  on the higher end and that would have hurt it. The module can be  picked up fairly cheap so that helps it now. I think it can be  mined for ideas and even used as it so I would say pick it up on  a dare and give it shot.

Welcome to Om Amarna, and the annual Horse Festival. It is a time  of celebration, drinking, haggling, and thanksgiving.

Celebrate while you can, because soon the peace will be  shattered. And in its wake will come danger, suspicion, and  tragedy.

In this first adventure in the cursed land of Tieros, beginning  characters will be forced to work together in a race against time  to find critical answers in a crowded, diverse, and paranoid  city. Answers that will satisfy the Dark Guard and the Cult of  Justice. Answers that will save their own necks from the gallows.

The Sword of Justice introduces Tieros, a land cursed by the acts  of an ancient hero, bound by common fate, and diverse in culture  and belief.

In this adventure characters will become familiar with an exotic  new PC race, the dangers of practicing magic in Tieros, the  fanatical Cult of Justice who worships Law itself, and the  ubiquitous Dark Guard, the military power that protects and  enforces peace.

Will you survive your first adventure in Tieros, or will it claim  your life?

This spell will allow the magic user to be comfortable in any  normal level environment that they might find themselves in. The  spell is limited in the range of extremes and the nature of the  environment that it will protect the cast from though.

The caster will find that they will be comfortable in what would  be standard ranges of temperatures they might encounter. They can  operate and be comfortable in a range of 0 to 120 degrees. The  spell does not provide any special benefits other than being comfortable though. The caster will not be protected from any other hazards in  the environment other than the temperature. Toxins or poisons in  the atmosphere will still affect them as will spells of a magical  nature involving temperatures.

Disclaimer: The spells that you will see, for how ever long the  write ups last, were all written up or conceived of back in the  80's so the terminology may not appropriate for anything other  than 1e and depending on how well I did back then it may be  slightly off for that as well. If there is any duplication of  spells that exist now it is most likely I wrote mine first :)  Please feel free to comment on them but try not to be too hard on  me. If anyone wishes to use these in anything they print please  let me know in advance and all I ask is proper credit.
Posted by Wymarc at 5:48 AM