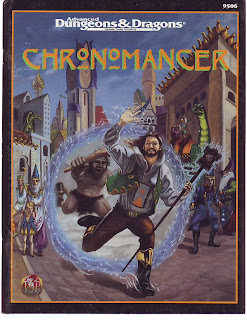 Chronomancer is a supplement released by TSR for the 2e AD&D  system in 1995. I am not going to spend a whole lot of time  writing about this product. I own the supplement only because I  am cursed with the completist affliction :).

Time travel in movies and stories are great. I am sure there are  even certain games where the idea works well. The idea might work  with Tri Tac's Fringeworthy and I know GURPS has a supplement for  it as well. In a fantasy RPG I am don't think it belongs. This is  just my opinion so your mileage for Chronomancer might vary.

Chronomancer describes a new class of magic user who's specialty  is the use of spells that are temporal in nature. I now a few of  the spells I have posted deal with this in a minor way but  nothing along the lines of what is put forth for the new class.  This is also 2e so there are the early stages of prestige classes  in here though they were called kits under 2e.

Normally a book like this will have something that the DM can use  in it's 96 pages even if they are not going to use it as  provided. In most cases this may come down to the spells, magic  items or monsters. Well the spells are mostly all time related  and though there may be one or two that could be ported overall  this is not the case. Next in looking at magic item they all seem  to fall into the fantasy tech realm. Even as good as Expedition  to the Barrier Peaks was I prefer my fantasy and science fiction  to not cross that much so strike two. Finally we have monsters  which for this are again all riddled with the time motif so they  won't work in a normal campaign...strike three.

All of this is really my bias. The product may be useful to many  and there could be campaigns were this concept plays out well. I  for the life of me just can't see how being able to go forward  and back in time can allow for a game with any continuity and not  getting a little over powered.

Again for the for the record though I love it in movies, TV and  fiction. Just not in my fantasy game.

You have all the time in the world - and now you don't.

The final and most dangerous fantasy frontier lies not in space,  but in time! At last, the dimension of Time is open to those few  wizards who would risk everything - even their very existence -  to visit ancient and forgotten lands, or see the unbelievable  wonders and horrors of the future. These few wizards are  Chronomancers, and this optional 96-page AD&D game accessory  reveals the secrets of their lives. New spells, new powers, and  new realms - as well as terrifying monsters - are brought to  light in this stunning work. Take time to study the mysteries of  chronomancy - before someone else takes that time from you.

When this spell is cast the magic user allows themselves to temporarily become one of the living dead in form. The caster will  have all of the physical attributes and special abilities of the  undead they are going to mimic but will retain they own mind.

The type of undead that the caster will be able to mimic is  determined randomly to a certain extent. When the spell is cast  the magic user will make a roll as if they were a cleric  attempting to turn undead. Their roll will determine what undead  they can mimic. They can mimic any undead up to they type the turn  roll would have worked against. For determination of this roll  the magic user is treated as a cleric three levels lower than  their own level.

While in the undead form the caster will have all of the  abilities and benefits as stated earlier. They will also have all  of the vulnerabilities as well. Should the caster be turned as  undead while in this form they will be affected as if undead  except for the case where they would be destroyed. If this is  called for then the spell is immediately broken and the caster  will need to make a saving throw. A successful save means the  caster only loses 1/4 of their remaining hit points while a  failed save means they lose 1/2.

The material components of this spell will be a small piece of  remains from any type of undead creature and a small vial of  grave dust from an unconsecrated grave. Neither of these are  destroyed with the casting of the spell and may be reused.

It should be noted that if the caster is able to have obtained a  pint of ale from a place called "The Winchester" the roll to  determine level of undead will be at +4 - just kidding.

Disclaimer: The spells that you will see, for how ever long the  write ups last, were all written up or conceived of back in the  80's so the terminology may not appropriate for anything other  than 1e and depending on how well I did back then it may be  slightly off for that as well. If there is any duplication of  spells that exist now it is most likely I wrote mine first :)  Please feel free to comment on them but try not to be too hard on  me. If anyone wishes to use these in anything they print please  let me know in advance and all I ask is proper credit.
Posted by Wymarc at 5:45 AM