FOR4 - The Code of the Harpers, Cassandra's Teleporting Door 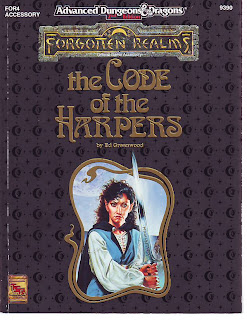 The Code of the Harpers - FOR4, is a 2e supplement released in  1993. The product is designed for campaigns that are based in the  Forgotten Realms setting and the supplement is even written by Ed  Greenwood who is the creator of the Forgotten Realms. I know for  may even the name causes a spike in the blood pressure. I to this  day have not played a session set in the Forgotten realms but as  a DM I have stolen from the material.

I am not going to bother doing an extensive review of the  product. Not because it is not good but because it is already  fairly well known for what it is. It is also so specific to the  Forgotten Realms that it is not something that can be used as is  for anything else. The history of the Harpers is so intertwined  with the setting that a DM would have to recreate almost  everything but the core idea to use it outside the setting.

The book does provide the DM the framework for what a group like  the Harpers could do for a campaign. Since the Harpers were from  Mr. Greenwood's setting I am sure they were not written as they  exist in the book but started as a germ of an idea and grew. This  is what the benefit of the book is to a DM not running a Realms  setting. Since the book is about the Harpers as they exist in the  Realms it does not lay out how to create a similar group. To do  this though all one has to do is take something as simple as the  chapter headings. Below are those heading:

Throughout the book there are numerous items that can be taken  and used outside the setting. There are actual code of the Harpers  is one such item as are the spells and magic items. The haunts  requires a little more work but there are some nice ideas to be  had there. In addition the book as a whole is well done and  reading it will provide a DM with ideas the entire time. One  section that stood out for me was a section called "A Typical  Harper's Year" which detailed the events of the Harper for a year  showing all the actions major and minor of note they performed.  It shows that some actions need not be heroic to be meaningful.

In the end I know that there will be some that will not want to  have anything to do with this because of what it is based on and  even perhaps the era it came from. As I said I have never played  in the Realms myself but I will steal from it. This book provides  enough material for the DM that it is worth having in the  collection. If you are a Realms DM the book is even essential if  you are going to run them properly.

From the storm-lashed rocks west of fabled Evermeet to the Plains  of Purple Dust, all the folk of Faerun have heard of the Harpers.

Noble fools, some call them. Crazy misguided meddlers, others  say. Still others disagree. "The one true hope of the Realms,"  said one princess. "A shining light in the darkness of our  lives," agreed a sage, "pray that it never goes out."

Just who are these mysterious, wandering folk who wear silver  harp pins and walk softly in the most dangerous shadows of the  Realms?

This book reveals the secrets, rules, and magic of the Harpers,  including: Harper Runes, Harper Magic, The long, colorful History  of the Harpers, Their evil foes, Their special Allies, The fabled  high Heralds, What Harpers Do, Harper Haunts: their strongholds,  and the Harpers who (literally) haunt them! Joining the Harpers,  and how to become a True Harper and a Master Harper...

...And more, from favorite Harper ballads to detailed Harper  NPCs. This is a sourcebook you'll turn to again and again. It  lays bare the warring power groups who work behind the scenes in  Faerun; no FORGOTTEN REALMS campaign is complete without it!

When this spell is cast the magic user causes the target door to become impassable for a specific number of attempted entries for  those who do not know the proper phrase to permit entrance. Those  attempting to use the door will find themselves somewhere else  when the door is used.

The spell will cause those who use the door to enter the room it  was cast from within to be teleported to another room when  entered. The spell will cause the door to be randomly determined  unless specific actions were taken during casting. The door the  individual is teleported to must be within a 500' radius. This  works in a sphere so movement up and down levels might be  possible.

The spell will affect a number of entities entering the room  equal to the level of the caster.The spell will have no effect on  those leaving through the door. If the caster wishes they may  specify the door that individuals will be teleported to. If this  is done then all who enter it, other than the caster, will be  teleported regardless of use of the phrase. The spell will remain  in effect until such time that all of the instances of  teleportation have been expended.

Disclaimer: The spells that you will see, for how ever long the  write ups last, were all written up or conceived of back in the  80's so the terminology may not appropriate for anything other  than 1e and depending on how well I did back then it may be  slightly off for that as well. If there is any duplication of  spells that exist now it is most likely I wrote mine first :)  Please feel free to comment on them but try not to be too hard on  me. If anyone wishes to use these in anything they print please  let me know in advance and all I ask is proper credit.
Posted by Wymarc at 8:31 AM